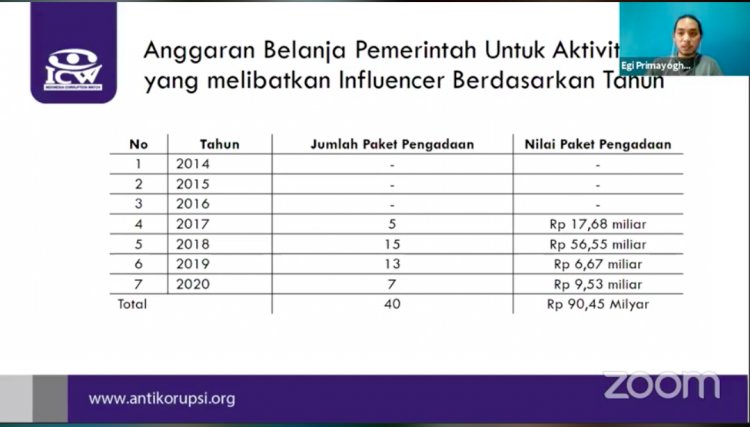 The use of influencers in the age of social media marketing for product engagement and promotion, is not something completely new. With the development of the internet, advertising through social media is increasingly being carried out, including by the Government through APBN or APBD spending. In the tourism sector, for instance, the Government is aggressively using the internet to increase the number of tourists through various kinds of socialization policy packages, both domestic and foreign. In this context, the internet has undoubtedly helped to disseminate information more quickly.

However, public policies that are socialized by the Government are often problematic, sensitive, controversial, and polemical. Social media does not have a fact-filtering mechanism like the more conventional mass media. Rampant controversies that are being promoted by the Government will become even more problematic if certain parties who want to roll out a public policy agenda bombard the public with inaccurate information. Likewise, when the inaccurate information is resonated by “influencers”—a term for individuals who have many followers in the virtual world—they themselves also do not have sufficient knowledge of the issues raised. Influencers as trends can and will convey any information with great impact, whether it is accurate or not, as long as they get paid in return.

For example, the proximity of artists and musicians to the government and their involvement in supporting government policies, occurred at the beginning of the COVID-19 pandemic. The Government held a BPIP concert, which involved many Indonesian celebrities and musicians (as influencers). This concert drew a lot of criticism for its insensitivity to the public’s distress in the face of crisis. The concert was also notorious for normalizing crowds in closed rooms for a long period of time, even though they, the Government, had previously implored the public to obey health protocols to prevent the spread of COVID-19.

The most recent example of this phenomenon is the blunder made by influencers, such as Ardhito Pramono (musician) and Gofar Hilman (public figure) who promoted the Work Creation Bill (Omnibus Law) through the hashtag #IndonesiaButuhKerja. Both of them finally apologized for “unknowingly” promoting the Omnibus Law, which was widely rejected by the public, through their social media accounts.

By looking at the development of the use of social media, internet and influencers in public policy contestation, and the increasing state budget allocation for socialization in the cyberspace, ICW felt the need to carry out an in-depth investigation towards government goods and service procurement (PBJ) activities related to digital activities and the involvement of influencers in disseminating government programs. The goal is to monitor the use of the State Budget (APBN) in the new landscape of cyberspace—which is increasingly being used by the Government to disseminate information and shape public opinion—so that it can still be done in a transparent and accountable manner.

The PBJ information was obtained through searches on the Ministry's LPSE website, as well as Non-Ministry Government Institutions (LPNK), NK, and two law enforcement agencies namely, the Indonesian Attorney General's Office and the Indonesian Police, and was carried out on 14 August - 18 August 2020. The information obtained for the investigation is taken from the PBJ packages information through 2014-2018 period. The key words we use to identify PBJ packages are, "social media / social media", "influencer", "key opinion leader", "communication", and "Youtube".