Fact Sheet: The Management and Uptake of Blacklisted Firms Data by Civil Society 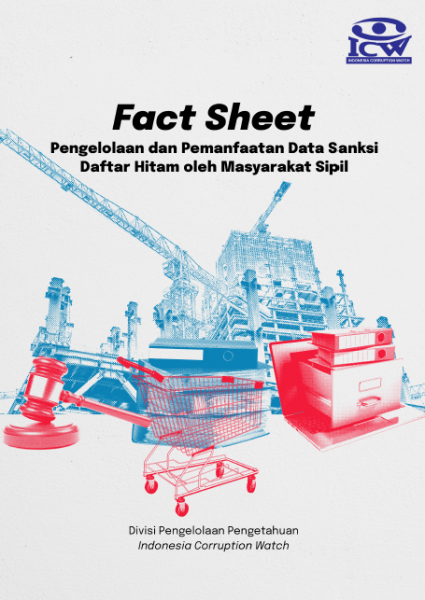 Problems arise, however, when the substantial budget lacks government oversight. According to the Corruption Eradication Commission (KPK) data, the KPK prosecuted a total of 1,144 cases from 2004 to 31 March 2021. Of that, 21 percent are public procurement cases.

Criminal punishment against private firms that are allegedly involved in corruption practices has not been consistently directed at corporations, as suggested by the findings from ICW’s studies in 2018 and 2019 on criminal prosecution against corruption cases. During those years, there were only 11 corporations that law enforcement authorities determined as suspects in corruption cases.

Currently, the authorities’ focus is limited on individuals, without considering the involvement of corporations that may also be benefitting from the crime. In fact, corporations play an important role in contributing to the quality of a project’s output. It is important that law enforcement authorities and other competent institutions expose allegedly corrupt corporations.

The National Procurement Policy Agency (NPPA) has developed a platform to track and identify fraudulent firms, namely by publishing the names of blacklisted firms on inaproc.id/daftar-hitam website. Blacklisting is the ‘stick’ that the government uses to encourage compliance among private firms. According to the NPPA's 2017 data, the list contained 228 private firms with 166 of those, or 72 percent, in the construction business.

The data imply that many violations are committed by construction sector firms. They also support the hypothesis that awarding a public project to an unqualified firm would lead to poor output, i.e., poor quality, or even non-functioning public facilities and infrastructure.

The question then is how we can work with and analyze the available data/information to make sure that only credible vendors and suppliers, with strong track record, are awarded public contracts. In the event that a project is awarded to a less-credible firm, an oversight and reporting mechanism needs to be in place as safeguard.

The need for data and oversight process motivates ICW to develop this fact sheet that demonstrates one way of using the Blacklisted Firms data. This document is expected to help authorities make improvements and minimize the possibility of unqualified firms to be awarded contracts, thus leading to quality public services, facilities, and infrastructure that are genuinely beneficial for the society.