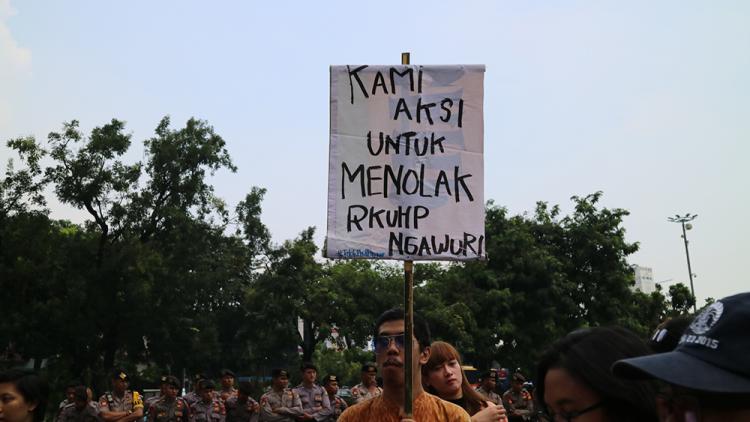 KPK and Corruption Court to be paralysed, corrupt officials to benefit

Substantially, the existing RKUHP is considered to endanger democracy, human rights enforcement, and eradication of corruption in Indonesia. A group that strongly rejects the RKUHP is the National Alliance of Reform of the Criminal Code. This alliance has a membership of several institutions such as ICJR, Elsam, YLBHI, ICW, PSHK, LeIP, AJI Indonesia, KontraS, LBH Pers, Imparsial, HuMA, LBH Jakarta and PSHK.

The Alliance states there are seven reasons why RKUHP should be rejected. First, it has a punitive/imprisonment perspective and repressively opens the space of criminalization beyond the existing colonial legacy Criminal Code (over-criminalization). Second, it is not in favor of vulnerable groups. Third, it threatens government development programs, particularly health, education, family resilience, and community welfare programs.

Fourth, it threatens freedom of expression and the democratic process. Fifth, it contains many flexible and vague articles that encourage the practice of criminalization. Sixth, it threatens the existence of independent institutions. Seventh, it has been discussed without involving the public health, social, development planning, correctional, and other related sectors.

Related to the issue of corruption eradication, the discourse of codification of the crime of corruption into the RKUHP still raises an issue. The issue cannot be separated from the implication, which could potentially restrain the authority of independent institutions such as KPK in the effort to eradicate corruption.

First, it restrains the authority of the KPK to take legal measures and to prosecute. Although the Government and the House of Representatives often argue that the legalization of the RKUHP will not interfere with the work of the Commission, the reality is otherwise. KPK's authority in conducting investigation and prosecution in the Corruption Eradication Commission Law is no longer valid if the RKUHP is legalized. This means that the KPK is no longer authorized to handle corruption cases regulated in the Criminal Code. In the end the KPK will only become the Corruption Prevention Commission because it cannot conduct legal measures and prosecution.

Third, a number of provisions on the crime of corruption in RKUHP actually benefit the perpetrators of corruption. This condition is different from the Anti Corruption Law that has been considered effective against corruption. The threat of imprisonment and penalties for perpetrators of corruption in the RKUHP is lower than the provisions set forth in the Anti Corruption Law. Even worse, corrupt officials who are prosecuted and even convicted, are not required to repay their monetary gains to the State because the Criminal Code does not regulate a penalty of repaying or returning the money they have collected as corruption.

Fourth, RKUHP also does not accommodate the provisions of Article 4 of Corruption Law, which states that compensating the state for its financial loss does not remove the crime of corruption. If the provision of Article 4 is not included in the RKUHP, in the future perpetrators of corruption can simply return the financial loss of the State in order not to be processed by the law enforcement.