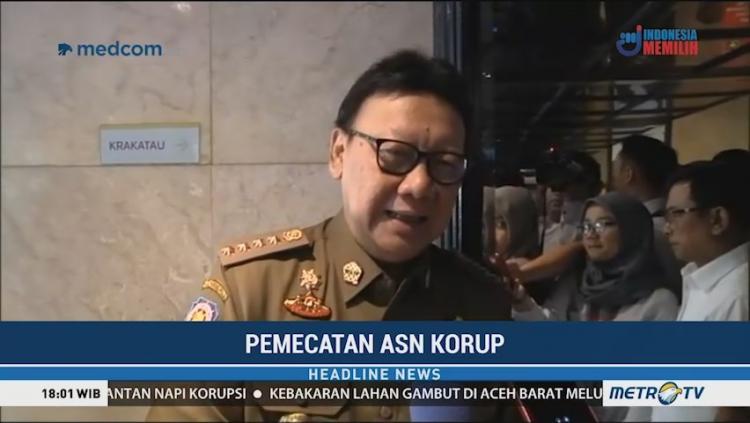 On 13 September 2018 the Ministry of Home Affairs, the Ministry of Administrative Reform and Bureaucratic Reform, and the National Civil Service Agency (BKN) issued a Joint Decree (SKB) regarding the dismissal of civil servants (PNS) who were caught of corruption. The decree is a follow-up to the discussion between the three institutions and the Corruption Eradication Commission (KPK) on 4 September 2018.

At least there are 2,357 civil servants convicted of corruption who are still active and receive salaries even though they have been given legally binding sentences. The data were submitted by BKN after establishing cooperation with the Directorate General of Corrections of the Ministry of Law and Human Rights in 2016. The cross-agency activity found that there were 7,749 civil servants who were caught in corruption cases, 2,674 of whom were convicted. Of the total convicted, 317 of them have been dishonorably discharged and the remaining 2,357 civil servants were still actively working.

The third point of the SKB clearly states that the period of imposition of sanctions is no later than December 2018. However, after entering January 2019 there are still 1,466 civil servants who have not been dismissed. The SKB seemed to be ignored by the Regional Heads as the Personnel Development Officer (PPK), heads of institutions, secretaries general and regional heads who were given the mandate to dismiss according to Law Number 5 of 2014 concerning State Civil Apparatus (Law Number 5 of 2014), Article 53.

At present there are 2 (two) regulations governing the dismissal of civil servants who have been convicted of corruption. First, Law Number 5 of 2014 concerning State Civil Apparatus in Article 87 paragraph (4) letter b. Second, Government Regulation Number 11 of 2017 concerning Management of Civil Servants (PP Number 11 of 2017) in Article 250. In these regulations, it is stated that civil servants are dishonorably discharged when they are sentenced to imprisonment or confinement based on court decisions that are legally binding because of criminal acts related to their position, or criminal offenses related to their position and/or general criminal offenses.

The Indonesia Corruption Watch (ICW) through the information request mechanism guaranteed by the Public Information Disclosure Act obtained data from the National Civil Service Agency (BKN). BKN data as of 17 September 2018 show that there were 98 civil servants convicted of corruption working in the Ministries and 2,259 corrupt civil servants working in the provinces, regencies and cities.

President Joko Widodo should have taken decisive steps as the highest supervisor of civil servants, to order PPK to dismiss all civil servants who have been convicted of corruption. The weak commitment to eradicate corruption committed by the Government can potentially cause state losses. In addition, the zero tolerance echoed by the Government can only be said as lip service. *** (Wana/Agus)