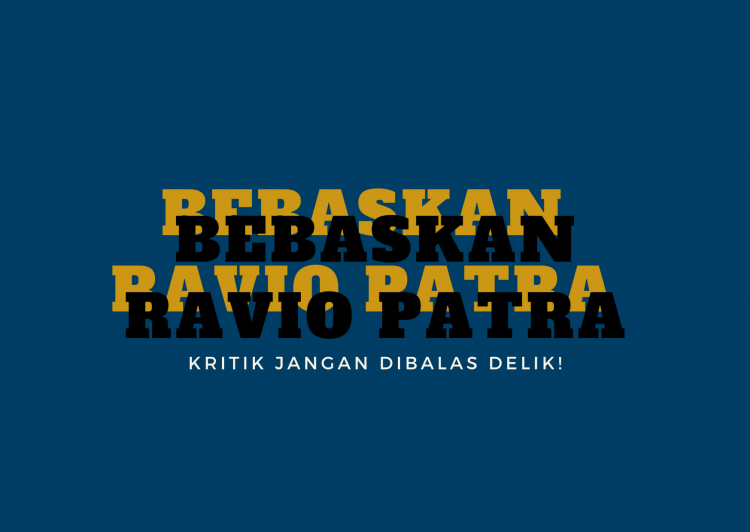 Ravio Patra, a public policy researcher and advocate for legislative advocacy who often voiced criticisms of the administration, was arrested last night, April 22, 2020, at around 21:00 - 22:00 UTC +7. Previously through his Twitter account, @raviopatra, Ravio had criticized President Special Staff, Billy Mambrasar, who was allegedly involved in a conflict of interest in government projects in Papua. He also wrote his criticism in the handling Covid-19 through an online media Tirto (dot) id. The criticism is related to what Ravio Patra has been doing, which is to encourage Indonesia to be more transparent and open, especially since in the last three years Ravio has been active as the Independent Reporting Mechanism (IRM) Researcher for Indonesia in the Open Government Partnership.

Until now, it is not known yet which police unit had captured Ravio and where he is being detained. The Legal Assistance Team from the Coalition to Reject Criminalization and Case Manipulation is looking into the Jakarta Metro Jaya Regional Police Office.

Based on the preliminary information that we received on Tuesday, April 22, 2020 at around 14:00 UTC +7, Ravio Patra reported to SAFEnet that someone had attempted to hack into his WhatsApp. When he tried to turn on his WhatsApp, this message appeared, “You've registered your number on another phone”. After Ravio checked his SMS inbox, it turned out  that there was a request to send One Time Password (OTP) which was usually used to confirm changes to Whatsapp setting.

We strongly suspect that the perpetrators of the burglary found a way to hijack Ravio’s phone number in order to take over his Whatsapp, which was previously registered with Ravio's number. Because the OTP is sent to Ravio's number, it is very likely that the hackers have been able to read all incoming messages through that number. Ravio has implemented multiple layers of security on his WhatsApp: he has implemented two way verification and also installed fingerprints, although it seems that the ability of the hackers can pass through all that.

Ravio also briefly announced through his @raviopatra account on Twitter that his WhatsApp was hacked and controlled by someone else, and requested that no one contacted his WhatsApp, not responding to messages coming from his number, and request that his account be removed from various WhatsApp Group. Two hours after making the announcement, precisely at 19:00 UTC+7, Ravio's WhatsApp was finally restored. During the time it was taken over, the perpetrators spread provocative fake messages around 14:35 local time. The message sent to a number of unknown numbers reads, "CRISIS IS HAPPENING, IT IS TIME TO BURN! LET'S UNITE ON 30 APRIL FOR THE MASS LOOTING NATIONALLY, ALL STORES ARE FOR US TO LOOT!”.

We see and believe that the motive for spreading these fake messages is to frame Ravio, as if he was the provocator attempting to create riots. SAFEnet has communicated to Ravio to collect and record all evidence so that later SAFEnet Online Security Division can further examine the device.

Around 19.14 West Indonesia Time, Ravio called SAFEnet again and said, "Brother, the security said that someone was looking for me but he was already gone. He looked scary, he said." SAFEnet's colleagues ask Ravio to turn off the cellphone and pull out the cellphone battery according to the standard security procedures, then evacuate himself to a safe house.
Ravio briefly contacted and communicated with the Indonesian Legal Aid Foundation (YLBHI)

management to ask for legal advice and also contacted the Human Rights Commissioner to ask for help if something happened in the near future. Ravio had reported that he was preparing to evacuate to a safe house, but afterwards, for more than 12 hours he could no longer be contacted. At the same time around 00.30 WIB, an article appeared at seword (dot) com with a text concerning Ravio accompanied by a screenshot that included the fake provocative message (about 30 April national mass looting plan).

On Thursday (23/04) morning, around 08.00 WIB, SAFEnet received information that Ravio was arrested overnight by police intelligence in front of the safe house.

Therefore, the Coalition Against Criminalization and Case Manipulation consisting of a number of community leaders and civil society organizations urges that:

1. President Joko Widodo and the National Police Chief to immediately release Ravio Patra, stop the criminalization process, and also stop the acts of silencing other citizens;

2. The President and the National Police to immediately stop the efforts by certain parties to hack devices or critical social media accounts that encourage the government to be transparent and work properly. The government must ensure that every citizen is protected by law in enjoying the rights guaranteed by the 1945 Constitution of the Republic of Indonesia;

3. The National Police to immediately dismantle and reveal the parties involved in hacking Ravio Patra's cellphone. This ability to hack is not possessed by just any common person/organisation. The National Police should arrest those who hacked Ravio's cellphone and spread the provocative hoax by using Ravio’s WhatsApp, instead of arresting Ravio.

Thus we submit this release,