Battered, not beaten: the fight against corruption 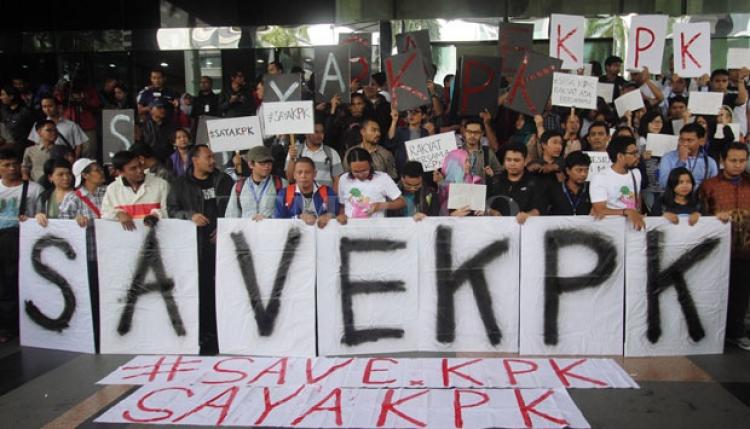 Indonesia Corruption Watch (ICW), one of the oldest anti-corruption organisations in Indonesia, recently marked 17 years(link is external) of fighting abuse of power by government officials. ICW was born at the end of the New Order era, inspired by the movement to topple Soeharto, an authoritarian leader who had used his position to enrich his family and cronies.

The emergence of a strong civil society movement against corruption has, in fact, been one of the defining features of the reform era. Civil society organisations like ICW have played a critical role in strengthening public awareness of corruption, conducting investigations into corruption in the delivery of public services, and working with government officials to provide policy advice and analysis for further reform. Civil society worked closely with the Corruption Eradication Commission (KPK) to establish robust operational practices in its early days. It continues to work with the institution by providing evidence of corruption for further investigation, monitoring the selection of its commissioners, and consolidating civil society support when it has come under attack.

After 17 years, how effective has this movement been in reducing the prevalence of corruption? Overall progress is not good. According to the Corruption Perceptions Index (CPI), which ranks countries based on perceived levels of public sector corruption, Indonesia still lags far behind its neighbours Singapore and Malaysia, and even Thailand and the Philippines. In 2014, Indonesia was ranked 107 of 175 countries, placing it behind countries like Burkina Faso (85), Bolivia, and Niger (both 103).

The success of the anti-corruption movement should not, however, be assessed solely by the CPI. One mark of the movement’s success is the effectiveness of the KPK in bringing corruptors to justice. It has claimed the scalps of a long list of high-ranking public officials, law enforcement officials and businessmen who, in the past, would have been largely untouchable. The KPK is arguably the most important legacy of the anti-corruption movement initiated in 1998. It has changed public perceptions and provided the people with hope. For almost 10 years, the public have relished the KPK’s success. But this has also provoked a strong backlash. Legislators and political parties – many of whom have suffered at the hands of the KPK – have tried to change the focus of the institution from enforcement to prevention. The police have made repeated attempts to “criminalise” the leaders of the commission, bringing trumped-up charges against them. Leaders of the Judicial Commission – and Indonesia Corruption Watch activists – have also been targeted with defamation lawsuits. Denny Indrayana, the former deputy minister of law and human rights and the founder of Yogyakarta-based anti-corruption organisation Pukat, has been charged with corruption, something he has spent his career fighting to eradicate.

Even when efforts to criminalise activists are unsuccessful, a chilling environment of self-censorship and hesitation is created. In the media, on Facebook, Twitter, and even in public discussions, activists are beginning to bite their tongues for fear of being reported to the police. It might be good for those seeking to perpetuate this corrupt system but people have become discouraged from expressing support for the anti-corruption movement. Even the smallest slip-ups from the past might result in a summons letter from the police.

At the same time, the Constitutional Court has damaged the anti-corruption movement by lifting a ban on former criminals (including those convicted of corruption) competing in elections. Meanwhile, on Monday, the Ministry of Law and Human Rights granted Independence Day remissions(link is external) to corruption convicts, including the notorious former Democrat Party Treasurer Muhammad Nazaruddin.

The transition from President Susilo Bambang Yudhoyono to Joko “Jokowi” Widodo brought new hope for better governance in Indonesia. Jokowi is the first president from outside the political and military elite, known for his commitment to anti-corruption and bureaucratic reform. His regularblusukan surprise visits to check on government officials and hear community concerns made him popular with both the grassroots and the middle and upper classes. But since coming to power, practical politics appears to have got in the way. Jokowi’s anti-corruption spirit seems missing in action. All of the major setbacks to the anti-corruption movement have occurred in his term. Jokowi’s inaction during the recent conflict between the police and the KPK is deeply concerning for the future of corruption eradication in Indonesia.

Jokowi’s failures do, however, provide a valuable space for reflection on the status of the anti-corruption movement. The challenge of corruption is becoming greater and more complex. The movement has also been weakened by the transfer of several prominent civil society leaders, such as Teten Masduki, to the palace, where they have become part of Jokowi’s administration. This has led to fragmentation of the movement among the remaining activists who wish to remain independent of the state.

Indonesian civil society has clear priorities. Issues of anti-corruption, justice, free education, human rights, and the welfare of workers, farmers, and fishermen already form an important part of the national discussion. But civil society is now divided. Under a new, and seemingly weak, government, civil society organisations need to reorient the anti-corruption movement, improve coordination and build a stronger coalition to deal with the many and serious challenges the movement now faces.