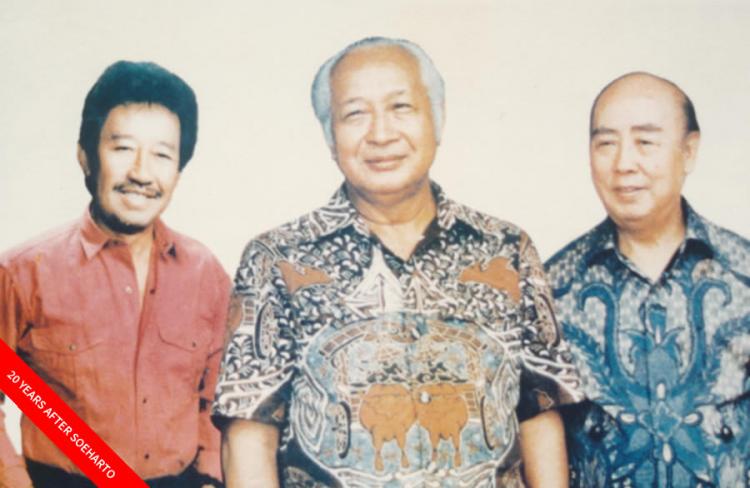 One of the most notorious aspects of the authoritarian Soeharto regime (1966-1998) was the privileges enjoyed by a small number of favoured business tycoons who were able to harvest extraordinary economic rents from monopolies and contractual rights.

Most prominent among these “cronies” (konco) was Soeharto’s long-time business associate, Liem Sioe Liong, who after 1966, assembled a huge business conglomerate, the Salim Group. “Bob” Hasan (The Kian Seng), who controlled the Kalimanis conglomerate and managed many of the Soeharto family foundations through the Nusamba group, was a foster son of Soeharto’s mentor, General Gatot Soebroto. Others were Soeharto family members, such as half-brother Probosutedjo and cousin Sudwikatmono.

Until the 1980s, these four men, two ethnic Chinese (The Kian Seng changed his name to Hasan when he converted to Islam) and two close Javanese relatives of Soeharto, controlled most of the commanding heights of the Indonesian economy. Thereafter, it became more complicated as the president’s own children went into business and leveraged power.

Although there had been cosy relationships between politics and business before Soeharto, the cronyism of the New Order was a new phenomenon in post-independence Indonesia. During the democratic period (1950-1957), changes of government had been so frequent that relationships did not have time to mature into cronyism. After 1957, when President Soekarno was openly hostile to capitalism and capitalists, there was little scope. When Soeharto took over the presidency in 1966, he brought with him business associates who already enjoyed his trust. They had a head start on newcomers and Liem Sioe Liong, in particular, prospered. The stability of the regime over 32 years gave ample time for these relationships to evolve into an archetypal cronyism.

Nevertheless, there was a prehistory of cronyism. In the precolonial era, sultans and rajas awarded privileges to favoured merchants, usually foreigners, in return for their assistance in mobilising state revenue. Sometimes holding official appointment as harbour masters (syahbandar), these rich merchants were acknowledged as leaders of their ethnic communities but rulers could be confident that their economic power would not translate into political power at court. The parallel with the New Order is readily apparent and it rested upon the “othering” of the ethnic Chinese business community.

In the post-Soeharto era, business tycoons have flourished, and many enjoy close links with political leaders, but in popular discourse they are no longer identified as cronies. The obvious question is what happened to those cronies and their wealth. The less obvious, and perhaps more interesting question, is what has happened to the institution of cronyism. What changes since 1998 have transformed the relationship between power and capital and what new institutions have come into being?

Where are they now?

Liem Sioe Liong fled to Singapore in May 1998 after his house, bank and businesses were targeted by street mobs and he died there in 2012 at the age of 96. Although his Bank Central Asia (BCA) became a casualty of the financial collapse, the industrial and retail segments of the group survived. His son, Anthony Salim, expatriated the Indofood Group to Singapore to become a multinational corporation, while in Indonesia he expanded into small retail stores (Indomaret), oil palm plantations and urban property.

Soeharto’s cousin Sudwikatmono (b. 1934) died in Singapore in 2011. Although his personal holdings were not more than 5 per cent, he had served as president director of Liem Sioe Liong companies Indocement, Bogasari (flour) and Waringin Kencana (agri-business). He was also a businessman in his own right – he founded the nation-wide Studio 21 cinema chain (now Cineplex 21 group) and served as chair of various business associations. He sold his stake in Studio 21 in 1999 and much of his wealth was dissipated in the failure of his family’s Bank Surya but he was able to rebuild a business interest around Indika Energy, now managed by his son, Agus Lasmono.

Bob Hasan (b. 1931), former timber king and briefly minister of trade (1998), is still alive, although in frail health. His stronghold was the timber and plywood industry through his own Kalimanis group and as chair of the plywood association Apkindo. Hasan became the prime scapegoat for the corruption of the Soeharto era and was imprisoned from 2001 to 2004. His Kalimanis Group is now much diminished, while the interests of the holding company Nusamba were redistributed among the Soeharto children long ago.

Probosutedjo (b. 1930), Soeharto’s half-brother, died recently, in March 2018. His holding company, Mercu Buana, was privileged through import licences, most blatantly through the clove import monopoly shared with Hutomo Mandala Putra (“Tommy”)  Soeharto, but he diversified into chemicals, glass, automobiles (Renault), property, contracting and even education (Mercu Buana University). Like Bob Hasan, Probosutedjo was convicted of economic crimes and in 2003 sentenced to four years jail.

The wealth of the Soeharto family and its former cronies has never been properly traced but a few generalisations can be made. First, a large part of Indonesia’s banking capital was destroyed during the financial crisis of 1998 and 1999. In subsequent restructuring, personal holdings were greatly diluted. Agri-business, industrial capital, infrastructure and property holdings survived largely intact. Industrial and plantation assets have mostly been vested in corporations with part-listing on the stock exchange. The opaque foundations (yayasan) of the Soeharto era are now outmoded, except for special purposes. All this has brought greater transparency but most “old money” is vested in anonymous nominee holdings. The ownership of urban land is especially opaque and its value has escalated much faster than inflation.

Business tycoons still need political protection but in the democratic era the rules have changed, for several reasons. First, there is no longer overt discrimination against Indonesians of ethnic Chinese descent. Prominent businessmen are now public figures and may hold powerful positions as ministers, party leaders and even the former chair of national legislature (Setya Novanto).

Second, there is no longer a single power centre. Monopoly has given way to oligopoly. Democracy with coalition government means that power is now diffused among political parties, highly contested and very negotiable. Tycoons can therefore hedge their political bets and be less vulnerable to blackmail and extortion.

Third, private business has become socially respectable. Whereas a generation ago high school graduates still looked to a career in the public service, now they aim to go on to university and get a well paying job in the private sector. Entrepreneurship and innovation are seen as ways to get ahead. Tycoons are no longer overwhelmingly ethnic Chinese. The Bakrie and Kalla groups are two examples of large indigenous business groups whose heads successfully meld business and politics but there are also many new and up-and-coming players, especially in local regions.

Business magnates and political bosses therefore face a much wider range of choices as to how they interact and collaborate. Indonesian Corruption Watch chair Adnan Topan Husodo sees the new form of collaboration as one of “trusted allies” (orang kepercayaan) serving as de facto treasurers for political bosses.

For example, Hashim Djojohadikusumo, the former business partner of Titiek Soeharto (Siti Hediati Hariyadi), is the younger brother of her ex-husband Prabowo Subianto Djojohadikusumo, and is now the main fundraiser for Prabowo’s Gerindra Party.

Tycoon Aburizal Bakrie was not only the most powerful figure in the Golkar party but also a long-serving cabinet minister. His role as party boss was usurped by ethnic Chinese businessman Setya Novanto, who early in his career had partnered with Soeharto’s daughter “Tutut” Soeharto (Siti Hardijanti Rukmana) in a national driving-licence procurement contract. Almost two decades later, the logic of this informal deal inspired the Rp 5.9 trillion (US$424 million) national electronic identity card (e-KTP) project that resulted in a national scandal and Setya’s eventual conviction for embezzling US$7.3 million from the project.

Thus the interaction of elite politics and big business is no longer a story of a politico-business class as portrayed by scholar Richard Robison but rather a fast-changing narrative of intra-elite contestation, “money politics” and elite reconfiguration. Political leaders compete through complex and overlapping networks and a multiplicity of informal relationships with favoured business magnates.

The Soeharto children are still influential, as are the children of cabinet ministers and generals, and these “princelings” can still leverage old money into new wealth. However, their former cronies are no longer compliant, nor dependent upon them. Tycoons are able to cultivate informal relationships with competing powerholders from different parts of the state according to what best suits their strategic or tactical interests.

Contestability is a unifying theme through a long series of money politics scandals. While the primary aim is to secure “slush funds” or, even better, ongoing rents, to fund political parties, the defensive counterpart is to deny funds to rivals. Competing forces have been apparent in the struggle over shareholdings in Freeport Indonesia as the ruling clique of President Joko Widodo has sought to deny access to the profits of its gold and copper mines to rivals such as Vice President Jusuf Kalla or aspirant Prabowo Subianto. Coordinating Maritime Affairs Minister Luhut Pandjaitan appears to have resolved that play defensively through the vehicle of the state-owned holding company Indonesia Asahan Aluminium (Inalum), which he controls through his own company Toba Sejahtra.

Another instructive case has been the struggle for economic rents and slush funds from rights to import oil and gas. In the 1990s, Soeharto’s children had secured lucrative contracts from Indonesia’s state-owned oil company Pertamina.  Soeharto’s son, Bambang, allied with broker Muhammad Riza Chalid, who operated through Pertamina’s Singapore and Hong Kong-based import subsidiaries Pertamina Energy Services (PES) and Pertamina Energy Trading (Petral). During the Yudhoyono presidency, Riza diversified his political risk by allying with new powerholders, including senior minister Hatta Rajasa, from the National Mandate Party (PAN) and General Pramono Edhie Wibowo, both related by marriage to the presidential family.

In a leaked 2015 recording, Riza was captured explaining how he disbursed funds to the rival coalitions of both Joko “Jokowi” Widodo and Prabowo during the 2014 Presidential Election. During the Jokowi presidency, Vice President Kalla and his allies invoked good governance to attack Riza and dismantle Petral but it would appear that Riza has used informal networks to remain the prime broker for Indonesia’s oil imports.

Such contests and scandals echo the dictum of British Prime Minister Lord Palmerston (1784-1865) that there are no permanent alliances, only permanent interests.**